Art, Baltimore, and a LeaderShape Graduate

In the summer of 2007, I was lucky enough to attend one of the national sessions of LeaderShape in Illinois.  While I was there, I made incredible connections, grew more confident in my own abilities, and, maybe most importantly, outlined a plan that is still serving me to this day.  I wanted to find a way to use art to connect people, build relationships, and strengthen communities.  The staff and my peers at Leadershape helped me to ground an idea that had previously been a jumble of thoughts and words in my head, and made me realize that this is a thing that could actually happen.


Right after college I decided to serve with the Community Arts Collaborative, an Americorps Program in Baltimore, Maryland.   It was through this program that I was placed with my current site, 901 Arts, and I’m just about to start my third year as their Program Coordinator.

901 Arts is a community based after-school art center in the Better Waverly neighborhood of Baltimore.  We offer art and music classes to kids in the neighborhood totally free of cost, which is frequently a deterrent for kids to attend afterschool programs.  We also serve as a general hub of community activity, a place to learn about what’s going on in the neighborhood, who to talk to if you want to get things done, and we frequently put on our own events to connect neighbors.   Last year, we served 77 kids through our weekly classes and many more kids and adults through our neighborhood events. 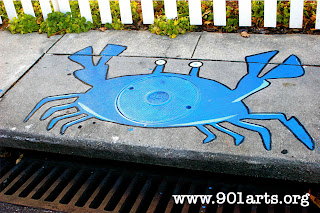 In the past two years I’ve made amazing connections with the neighborhood, especially our youth.  It was through collective art making that we were able to establish these relationships, which we can now build upon to create even more amazing things.  In the last two years, teenagers in the neighborhood partnered with our director, Sarah Tooley, to create thirteen Sea Creature Storm Drain murals, drawing attention to the connection between storm water and the environment.

This past summer, through a Baltimore City program, we were able to employ nine Better Waverly youths at 901 Arts.  For six weeks, the teens worked to fix up the art center, created one of a kind artwork that would be sold as a fundraiser, discussed social justice topics, visited cultural landmarks around the city, and learned new skills and trades.  After the program ended, one teen told me that originally he didn’t really care about art, but now he is genuinely interested and would like to learn more. 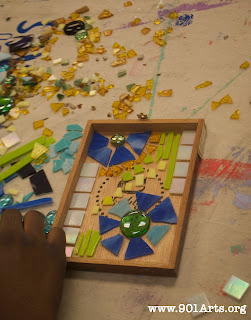 My time serving with Americorps and 901 Arts has been an incredible experience.  It has shown me time after time that art can be a tool for creating connections, as well as expressing ones thoughts and ideas.  I’m excited to be able to expand upon this work in the upcoming year, to see just how far we can push this concept.